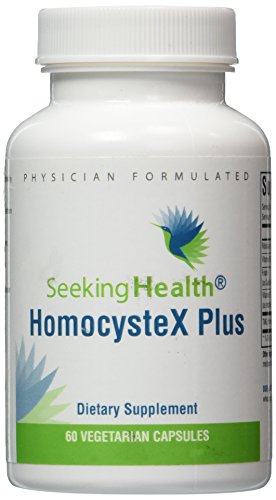 HomocysteX Plus | Provides Vitamins B2, B6, B12, Folate And TMG | 60 Vegetarian Capsules | Physician Formulated | Seeking Health

Feature:
HomocysteX by Seeking Health supplies bioactive forms of four essential B-vitamins together with betaine (also known as trimethylglycine or TMG) to synergistically support methylation processes and normal homocysteine metabolism. This formula is exceptional for those with defective MTHFR genes. Taking just 5-MTHF is not sufficient for those with MTHFR mutations which is why Dr. Lynch provides a comprehensive complex to support normal levels of homocysteine and support the methylation cycle.

Individuals most at increased risk for vitamin B12, folate, and vitamin B6 deficiencies are the elderly, vegetarians, and individuals with ulcers, Crohn’s disease, and bacterial overgrowth. This dietary supplement may be especially beneficial for persons with impaired gastrointestinal absorptive function due to aging, illness, or surgery.

The body’s methylation process is vital for formation of essential cell components such as proteins, nucleic acids found in DNA and RNA, and phospholipids that form nerve cell membranes.* By transferring methyl groups (three hydrogen atoms bonded to a carbon atom, known as CH3) from one molecule to another, methylation turns on genes, activates enzymes, drives detoxification reactions, influences hormone secretion, and helps maintain normal metabolism of homocysteine, a potentially harmful amino acid metabolite.* Unfortunately, poor nutrition, oxidative stress, infections, metabolic defects, and various other factors can impair methylation processes throughout the body.* To nutritionally support optimal methylation capacity, this product supplies folate, vitamin B12, B6, B2, and betaine in amounts and forms that are efficiently utilized and well-tolerated by the body.

There are no reviews yet.

Be the first to review “HomocysteX Plus | Provides Vitamins B2, B6, B12, Folate And TMG | 60 Vegetarian Capsules | Physician Formulated | Seeking Health” Cancel reply

Site developed by and hosted with The Web Doctor