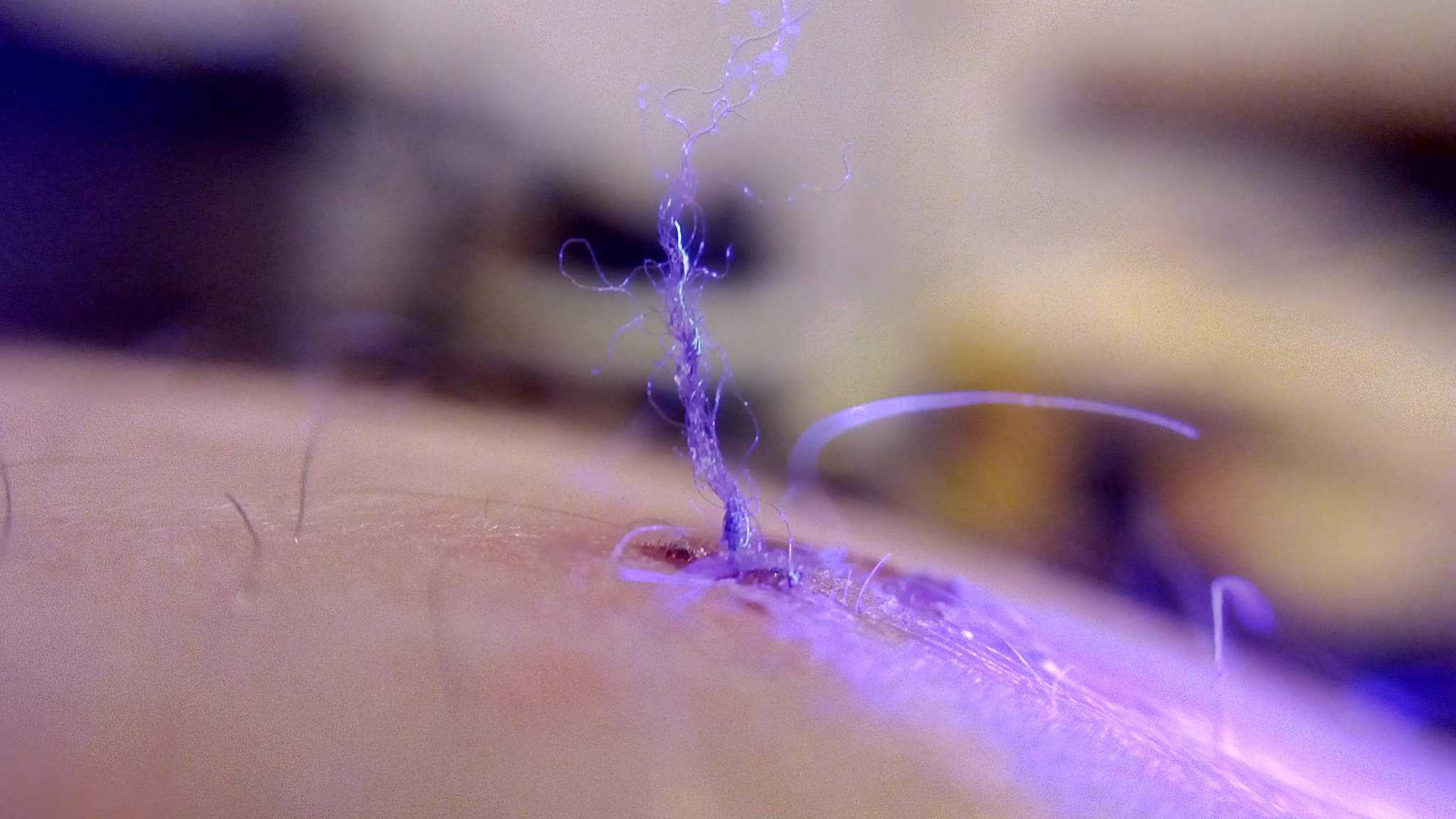 Morgellons (MD) is a skin condition that results in some people after exposure to Lyme Disease. Moreover, patients that experience it will develop slow healing ulcerations with characteristic microscopic, and often multi-colored, filaments embedded in skin tissue. MD filaments develop when skin cells become infected with the Lyme spirochete, and result from overproduction of proteins from these cells. Accordingly, keratin and collagen comprise the Morgellons filaments which originate from a base pavement of epithelial cells. (source: Filament formation associated with spirochetal infection: a comparative approach to Morgellons disease (nih.gov))

Can anyone get MD?

Actually, current research suggests only 6% of people exposed to Lyme disease will develop this skin condition. “Most Lyme sufferers, however, never develop Morgellons: two studies have put that figure at only about 6%.”
(source: Morgellons Found to Be Closely Linked With Lyme Disease (contagionlive.com))

What are the fibers made of?

“Histochemical studies demonstrate that the cutaneous filaments in MD are not self-implanted synthetic man-made textile fibers, but are hair-like human biofilaments composed of the structural proteins keratin and collagen, the products of keratinocytes and fibroblasts, respectively.”
(source: Classification and Staging of Morgellons Disease: Lessons from Syphilis (nih.gov))

Is MD associated with fungus?

In all honesty, “Staining of embedded filaments with calcofluor-white produced negative results, demonstrating that filaments are not cellulose as found in cotton, linen, or other plant-based textile fibers, or chitin as found in fungal cells and insect exoskeletons”
(source: Morgellons disease: a filamentous borrelial dermatitis – PubMed (nih.gov))

Do the fibers move?

Not on their own. MD filaments are simply malformed hairs and strands of superficial skin. The most common reason people would see them “moving” is if they are unwinding. MD filaments themselves have no mechanism for independent movement.

What are the black specks?

One research initiative examined these black specks and found them to be tightly wound bundles of filaments. In this image you can see that the black speck ended up actually being red upon magnification. 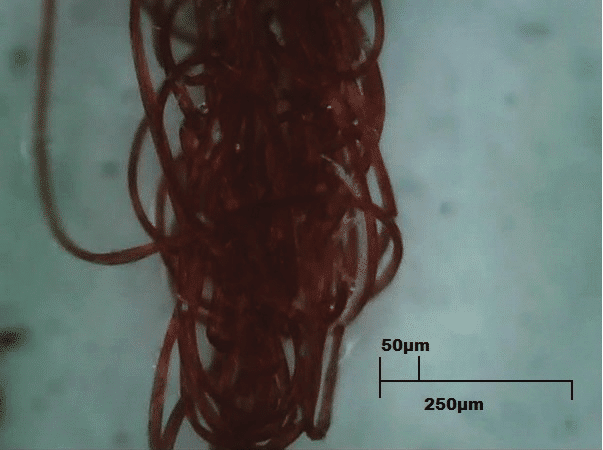 Figure 5. A “black speck” removed from the skin in Morgellons disease is red and magnified 500x.
(source: Morgellons: a novel dermatological perspective as… | F1000Research)

Do the fibers fluoresce?

Sometimes they do. While the exact mechanism for the development of this property is not yet known, it has been demonstrated that many filaments associated with Bovine Digital Dermatitis also fluoresce under UV exposure.

Is MD a Condition or a Disease?

Morgellons is technically a skin condition. Before we knew that MD was associated with an infectious process, and because it presents so distinctly, Morgellons was initially considered a new disease. That is why Morgellons is often referred to as Morgellons Disease abbreviated to MD. “Lyme is the disease that results in the MD skin condition.”

Aren’t Morgellons fibers in the environment, shouldn’t I clean my house and bathe several times each day?

“GMO plants contain NO Agrobacterium-specific sequences (except for several nucleotides that remain from the T-DNA borders after integration) and thus cannot serve a sources of any bacterial factors or effects.

The bottom line is that we found no DNA of Agrobacterium that is involved in genetic transformation in the patient samples. Also vast experience of thousands of people working with Agrobacterium every day shows no pathogenic effects. Finally based on the well known Agrobacterium biology there is no biological pathway that it has that can be even envisioned to produce morgellons symptoms.”
(source: The Exploitation of Morgellons)

Didn’t the CDC Morgellons study conclude the patients are delusional?

“We were not able to conclude based on this study whether this unexplained dermopathy represents a new condition, as has been proposed by those who use the term Morgellons, or wider recognition of an existing condition such as delusional infestation, with which it shares a number of clinical and epidemiologic features [26]–[31].”
(source: Clinical, Epidemiologic, Histopathologic and Molecular Features of an Unexplained Dermopathy (nih.gov) “CDC Morgellons study“)

How can anyone claim MD is associated with Lyme disease when the CDC study found no infectious agents?

“One case-patient each had a positive or borderline EIA for B. burgdorferi”
(source: Clinical, Epidemiologic, Histopathologic and Molecular Features of an Unexplained Dermopathy (nih.gov) “CDC Morgellons study“)

Why do so many people think they have Morgellons?

Because of the television exposure associating Morgellons with aliens and other cult topics, many people associate the term “Morgellons” with their beliefs or subjective experiences. Often these people don’t even understand that Morgellons is a skin condition. This is regarded as a mistaken belief and is elaborated on in this Chinese review of the literature.

“The first step needs to determine whether delusion exists or not. A delusion is defined as a firmly, but false belief held with strong conviction and contrary to the superior evidence. It is distinct from beliefs based on an unusual perception, such as formication. The beliefs that patients hold could be delusion, true observations, or overvalued ideas. This must be determined on a case-by-case basis. The presentation of a specimen is not a delusional behavior. Patients with DI/MD with animate or inanimate objects can exist, but the belief of cutaneous fibers may or may not be delusional. A physician is required to perform fiber analysis to identify the nature of fibers. If fibers are present and biofilaments of human origin, then they are a true observation. It is also possible that patients might observe fibers and mistake them for worms in which case the idea of infestation could be an overvalued idea. Real infestation with arthropods such as mites can also occur. Additionally, some patients could have lesions with adhering textile fibers that are accidental contaminants and could mistakenly believe that they have MD, in which case they do not have a delusional belief, but a mistaken belief. In summary, if a physician cannot differentiate between true observations, delusions, and overvalued ideas, they should not immediately make a diagnosis of delusional mental illness.”
(source: Reframing delusional infestation: perspectives on unresolved puzzles (nih.gov))

Morgellons is a condition that results from an infection. There is some evidence that the infection MD is associated with may be sexually transmissible (source: Culture and identification of Borrelia spirochetes in human vaginal and seminal secretions (nih.gov)), but the evidence suggests MD will only occur in those that are genetically predisposed to developing the condition. “Preliminary genetic studies have demonstrated nine genes with significant sequence variation in MD patients (E Sapi, University of New Haven, unpublished observation, 2017). Examination of genetic factors that contribute to MD is currently in progress.”
(source: History of Morgellons disease: from delusion to definition (nih.gov))

How big are Morgellons fibers, are they the same size as human hair?

Typically, MD filaments are much smaller than human hair. A microscope of 60x magnification or greater is required to both observe the filament, and determine if the filament is embedded in skin tissue. 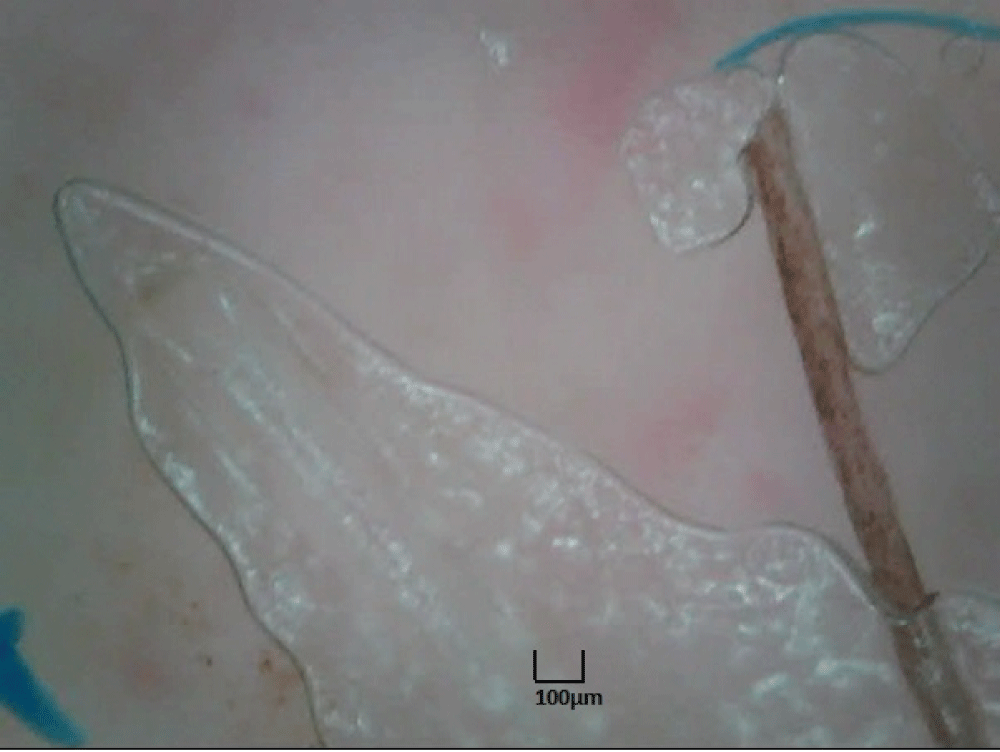 Figure 9. Blue Morgellons filaments arising from the infundibulum of the hairshaft at 500x.
(source: Morgellons: a novel dermatological perspective as… | F1000Research)

Are there any case studies of MD patients who did not self-diagnose?

“This patient had rashes exhibiting morphological variation and fiber formation consistent with MD. The patient had no prior knowledge of MD, and she was unaware of the presence of cutaneous fibers in her lesions. The presence of fibers in lesions matching the clinical definition of MD was first noted by her primary care physician upon physical examination with 50X magnification of skin lesions, and on that basis the diagnosis of MD was made. Her primary care physician knew of the association between MD and LD, and that led him to test for and diagnose LD, RF and other tickborne diseases. Had the patient not developed filamentous cutaneous lesions, she would most likely have continued undiagnosed and untreated.”
(source: Dermatological and Genital Manifestations of Lyme Disease Including Morgellons Disease – PMC (nih.gov))

Is Morgellons associated with syphilis?

“Although we have not detected T. pallidum in any MD subjects to date, given that there is a historical association with T. pallidum infection in comparable cases, it is reasonable to hypothesize that T. pallidum could be an etiologic factor in a subset of MD patients.”
(source: Classification and Staging of Morgellons Disease: Lessons from Syphilis – PMC (nih.gov))

“From 1902 to 1938, case studies describing “parasitophobias” or “dermatological hypochondriasis” that resulted in delusional interpretation of skin sensations were published sporadically.12–20 However, as early as 1935, an association between spirochetal infection and DOP was documented by the French physician Vié, who reported that six of eight of the subjects in his case studies had syphilis.18 In 1938, a pivotal narrative of DOP was published by Ekbom, a series of case studies describing patients who had sensations of movement and the belief that insects were crawling on or under skin. Ekbom felt that determining the underlying cause of the formication was important, stating that “it is the underlying illness that determines the overall presentation of the beliefs” and “it is perhaps too simple that the parasitophobias should be considered as mental illness and nothing more”.20 Interestingly, like Vié, Ekbom found that spirochetal infection was present in his patient cohort, and three of Ekbom’s seven patients had documented cases of syphilis. Despite the fact that syphilis was considered rare in Sweden, Ekbom did not believe that spirochetal infection was a contributing factor.20”
(source: History of Morgellons disease: from delusion to definition | CCID (dovepress.com))

Isn’t Lyme disease a bioweapon that escaped from Plum Island in the 1970’s?

“B. burgdorferi (Bb) is not a new organism: the earliest known case dates back 5,300 years in the mummy dubbed Ötzi,24 and Borrelia DNA was also detected in two museum specimens of the white-footed mouse, Peromyscus leucopus, collected in 1894.25 Spirochetes resembling Borrelia have also been found in amber-fossilized ticks from 15–20 million years ago.26 Therefore, spirochetal infections associated with MD may have occurred periodically hundreds or even thousands of years ago in human history, yet have gone unrecognized and unreported.”
(source: History of Morgellons disease: from delusion to definition | CCID (dovepress.com))

What about the hexagon crystals, aren’t those nanotechnology?

“Other patients have described hexagonal crystals and “glitter” in MD skin. Spectroscopic analysis of the hexagonal crystals proved that they were contaminating man-made hexagonal objects (of the type used in cosmetics and greeting cards) with either cellulose or plastic centers and a metallic coating (V Loyd, Mount Allison University, personal communication, 2017). The “glitter” that we studied contained salts that were likely human bioproducts, and may have a role in MD (unpublished data).”
(source: History of Morgellons disease: from delusion to definition | CCID (dovepress.com))

Site developed by and hosted with The Web Doctor
Loading Comments...